Soapstone, or steatite, is a naturally occurring soft stone composed primarily of mineral talc, and having a smooth, slightly soapy looking appearance. (The underlying Greek root means fat or tallow.)

Talc itself is a compound of Magnesium, Silicon, and Oxygen (Mg3Si4O10(OH)2), gray, white, or slightly greenish, often used in face powder, or to produce a smooth coating on paper, or in the production of plaster and paint. 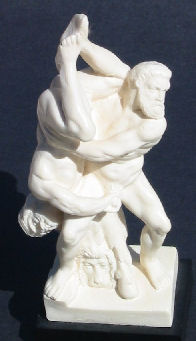 Soapstone is too soft to be used for stone tools, but because it is easily carved or polished and takes dyes well, it has long been used for small carvings of various kinds. In powdered form it is today molded into various forms and then finished by carving or abrasion and used to make small "marble" curios sold as souvenirs.

The picture at left shows a 1960s-vintage Italian statue, about 5 inches high, made of cast powdered soapstone intended for sale to tourists. (It is a copy of Vicenzio dei Rossi's infamous marble statue of Hercules & Diomedes. Hercules eventually threw Diomedes to the latter's own man-eating mares, but that has nothing to do with soapstone.) The picture on the right shows two kinds of deterioration that occur in soft soapstone art works. It is a tinted cast-soapstone vase from China, also from the 1960s. The surface shows substantial but uneven color loss, as well as surface blistering (an early stage of exfoliation) caused by moisture from its use as a working vase.