The drink we call cocoa (pronounced KO-ko) is made from the beans of the cacao (pronounced ka-KA-oh) plant, Theobroma cacao, a tropical tree native to tropical forest areas of central America. (Confusingly, the name cacao is sometimes also extended to a number of other, similar plants.)

The Cacao Tree. The cacao tree is confined largely to forest regions because it fares badly in direct sunlight or strong wind, and it requires a good deal of water. A tropical forest with 125 cm (about 50 inches) or more of rain per year is ideal. Modern cacao farmers leave shade trees amid the cacao trees. Ancient cacao stood about 11 meters (about 35 feet) tall, but modern varieties are only a little more than half that height, deliberately dwarfed to facilitate harvesting the fruits, the so-called "beans."

Cacao Beans. The cacao beans (or cocoa beans) are ribbed, thick-skinned fruits, about 30 cm long, that grow directly from the trunks and larger branches of the tree. Cacao is derived from the almond-like seeds contained in these. These seeds (like almonds) are composed of shells and (bitter tasting) kernels, separated by (sweet tasting) pulp. 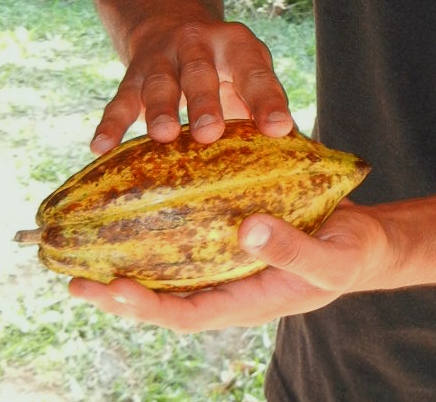 Processing. Traditional processing involves collecting the beans and opening them to remove the seeds, then cracking open the seeds and allowing the kernels and pulp to ferment in the shade for five or six days, during which time the pulp decays and drains off as a liquid, while the kernels themselves undergo a chemical change that makes them sweet. 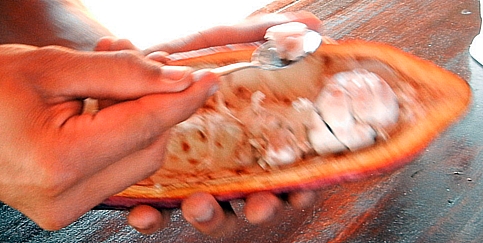 After fermentation, the kernels are dried in the sun to stop the fermentation and stabilize them for storage.

The kernels are about 50% vegetable fat ("cocoa butter"), about half of which can be removed by various processes of crushing and filtering for use in cosmetics or in the production of chocolate candy. The remainder can be successfully powdered and can be used to make cocoa.

Cacao in History. The earliest archaeological evidence for the consumption is cacao residue in ceramics of the Mokaya, a pre-Olmec people at the site of Paso de la Amada on the Pacific coast of the Mexican state of Chiapas, which dates from 1900-1500 BC. Researchers working with Maya pottery vessels from the Belize site of Colha identified traces of theobromine and caffeine in three of them, probably dating to about 900 BC. Spanish writers in the 1500s (well over two thousand years later) reported that Mexicans consumed cocoa in the form of a drink made by mixing ground cacao beans (sometimes mixed with ground corn) with water. This was then beaten with a wisp to make it frothy and sweetened with honey and flavored with chilies or vanilla (made from the seeds of a species of Mexican orchid). 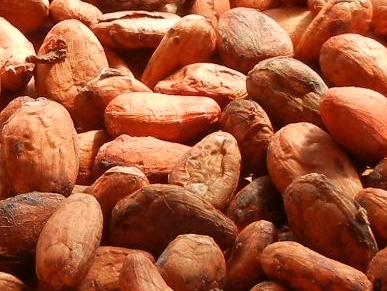 Cortés was served such a beverage by Moteuczoma, made with cacao collected as tribute from the tropical forest regions of Chiapas. And Bernal Díaz de Castillo, on the same expedition, imagined it to be an aphrodisiac. (He had been at sea for a long time.) An Italian visitor in the mid-1500s described the bitter Mexican drink of that time as better suited to pigs than to people, although he had to concede it was refreshing.

Modern cocoa is made with ground cacao to which sugar and hot water or milk is added and therefore tastes quite different from what Cortés would have been served. (It probably is not an aphrodisiac either.)

The Spread of Cacao. Already in 1502 Columbus sent some beans to Spain, where the drink, being fabulously expensive, became popular among the fashionable classes by the late 1500s, with a variety of (usually sweet) additives. Despite Spanish attempts to monopolize the cacao trade and keep cocoa production a secret, cocoa and chocolate consumption spread to France and Italy by the 1600s, where milk replaced water in the preparation of the drink.

The cultivation of cacao was deliberately spread to tropical areas along the western African coast, closer to European markets, and it is in West Africa that about half of the world's cacao is grown today. (The "discovery" in 2000 that much of Africa's cacao is produced by semi-slave child labor was initially greeted with dismay in Europe and North America, but was soon largely ignored because chocolate tastes good anyway.)

Cacao As Money. Cacao beans were a luxury outside of the areas where they were grown, and they are reported to have served as a medium of exchange ("money") in the great Aztec market of Tlatelolco, in what is today Mexico City. The modern central Mexican expressions tener mucho cacao and no valer un cacao may be derived from this.

Agricultural commodities do not make particularly good media of exchange, since their value does not remain constant, they deteriorate rapidly, and the farmers who grow them have a privileged position in the system. However it appears that imported cacao beans were common enough in Tlatelolco —without being too common— that they could and did function as currency for ordinary market transactions despite shifts in commodity "prices" over time.

Etymology. The word "cacao" comes from the Nahuatl (Aztec) word cacahuatl (borrowed into early Spanish as cahuacate). The word "cocoa" seems to derive from a confusion in English between cacao and the term "coconut." Cacao beans and coconuts look different, but both are tropical and grow on trees. (The term "coconut" comes into English from the Portuguese cóco and ultimately from Latin coccum "shell.")