The name "Acheulean" (ash-you-LEE-un) is taken from the name of a site named Saint-Acheul, near Amiens in northern France, and is used to refer to a range of Lower Paleolithic tool-making traditions found widely across Afro-Eurasia. The typical tool is a general-purpose hand-ax. A hand-ax is a core tool made by removing a relatively small number of flakes (which may be separately utilized for other purposes) from a fist-sized stone, producing a tool that is slightly heavier and rather blunt on one end, but chipped to be sharp on the other end. Of the two shown here, the upper one is chipped at only one end. The lower, later one has a more finished edge with better cutting ability, associated with later forms than Homo erectus. 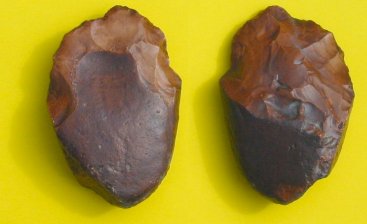 Acheulean tool kits contained more than hand-axes, but hand-axes (or closely similar choppers) are regarded as the "type" tool for these tool kits.

Although there are some analogs, the European Acheulean toolkit was apparently not produced by Homo erectus in many areas in eastern Asia, perhaps because the hard, sharp edge that can be produced when cut bamboo dries out provided a functional equivalent for many purposes. 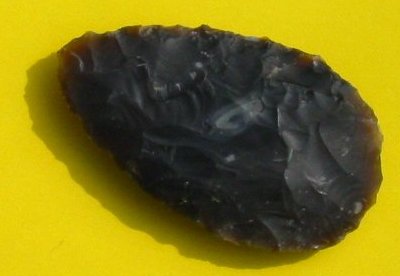 In Europe, the earliest (and crudest) Aucheulean materials are often referred to as Abbevillian, although most specialists are unconvinced that there is a significant enough break between Abbevillian materials and subsequent Acheulean ones to justify a terminological differentian, even in Europe. (A few authors prefer the spelling "Acheulian.")